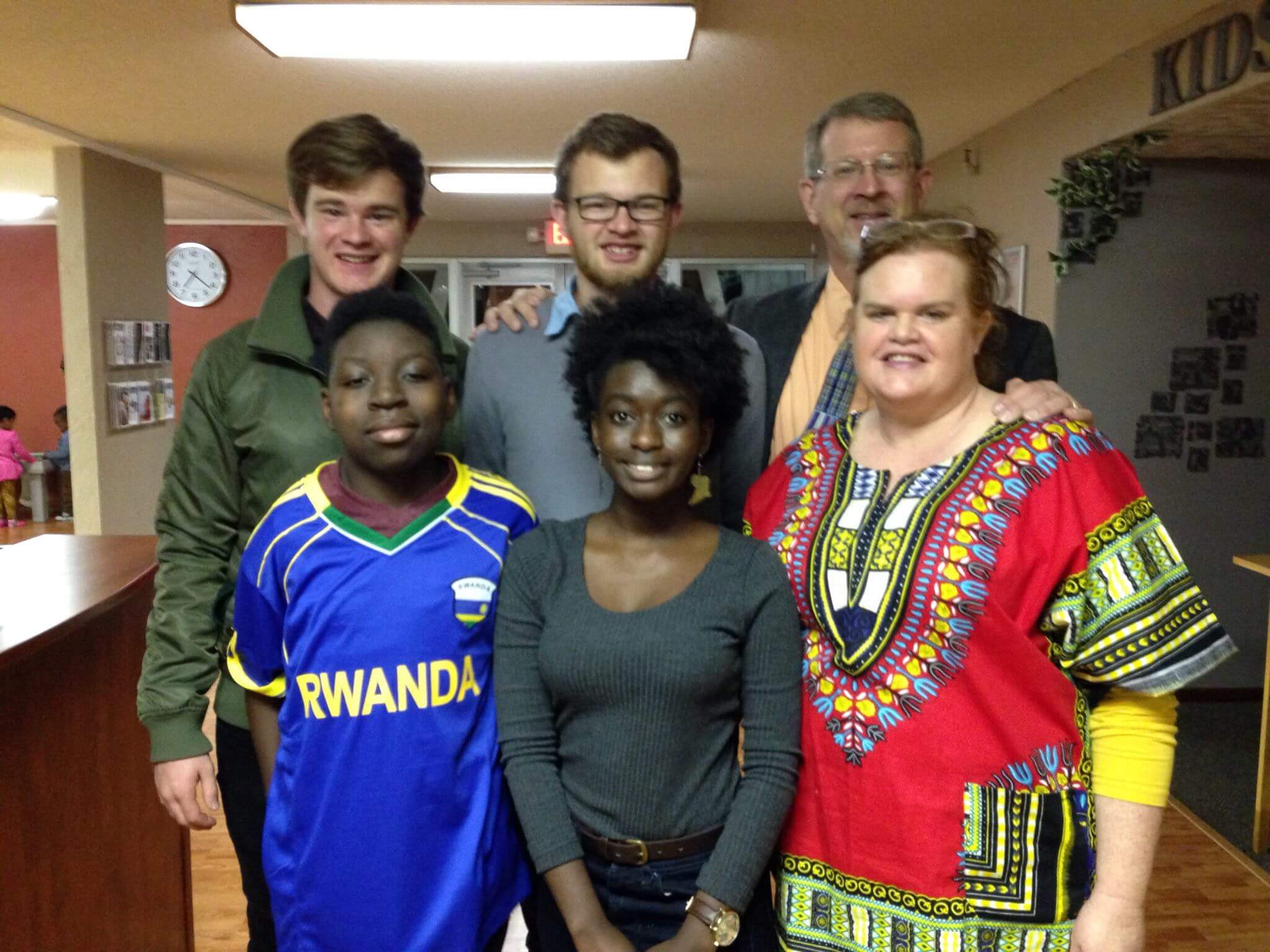 Dave and Jana Jenkins (far right) with their four children.

For 19 years, Dave and Jana Jenkins lived as missionaries in East Africa, raising their five children while launching new churches, writing a newspaper column, voicing a radio show, starting an international school and facilitating adoptions. When Dave and Jana moved back to the United States four years ago, they were hoping to find something as fulfilling as their time in Africa had been. While they are continuing to work as church planters in the Chicago area, a brand new opportunity was given to Dave and Jana in April 2015.

“It took a little bit of time to find our roots and get our bearings, but then, about a year ago, our friends who were house parents at Jubilee Village at the time called us and told us about an opening. And we ended up coming here,” Dave said.

For many reasons, the couple felt like becoming house parents at Jubilee Village fit in perfectly with their beliefs, experiences and the way they hoped to live their lives. “One thing that really drew us to Jubilee Village was that we had always been involved with orphans and adoptions, and it was a neat idea to be on the side of supporting mothers who were keeping their child, to prevent children from having to be adopted,” Jana said.

With this mission in mind, beginning life at Jubilee was an easy transition. “Everything we learned about the ministry, it was kind of the way we do our life anyway, so it was not a big leap. We’ve always had that open door policy, and we just kind of loved the community setting of this place,” Jana said.

Being a house parent at Jubilee Village is not an easy task. It requires patience, grace and faith in the mission. “When the young women come, they’re often the victim of hundreds of bad choices that other people made, which has created chaos in their life. And they may have made a few bad choices themselves,” Dave said.

“Our role here is to build relationships with the girls, to love on them, to give them a lot of grace and to just be that source of stability in their lives,” Jana said.

Dave and Jana embrace their role as house parents because they understand how important Jubilee Village is to the residents and to our whole community. “I’ve heard the young women, even when they’re frustrated with the rules, say, ‘if it wasn’t for this, where would I go?’ And truly, where would they go?” Dave said.

Jubilee Village gives struggling young mothers in the area a chance to get back on track, have a form of stability and safety and work towards independent living. “I love the name Jubilee, because I think all of us need that from time to time in our life: a chance to just totally start again, start fresh. I think this is what the young women need. I wish there were a lot more organizations out there like this one, because the need is huge,” Jana said.

Though Dave and Jana are glad to be house parents, the role can be challenging, especially when uncontrollable circumstances add to the already difficult life the girls are leading. “The most challenging part of this role is when you think girls are finally making some good choices and then something that is really outside of their control happens. A car breaks down for the third time, or some other kind of problem happens. And it’s just like, they were trying, but that negative situation sends them backtracking,” Jana said.

Yet for every negative circumstance that causes a hiccup in the path to success, there are positive circumstances that bring hope to both young women and the house parents. “I love it when they are making good choices and the circumstances are going well, and it starts to click for them and they’re starting to see ‘aha’ moments,” Jana said.

Jubilee Village is more than just a place to live, and it’s more than a place for struggling, young single mothers to receive case management. Though those are incredibly important pieces, Dave and Jana are clear that this is also a place for the girls to experience joy and community.

“I really enjoy when the young women are together [during community meals] and they’re laughing and they’ve kind of forgotten the stress. Being a single mom is so difficult, and at these moments they can just kind of enjoy and forget about some of those dynamics of stress,” Jana said.

With those moments of laughter in mind, Dave and Jana make an effort to seek out and appreciate joyful occasions. “We started having a block party once a month in the summer, and I was able to get hold of a bouncy house,” Dave said. “Watching all the women with their children, playing, makes me smile. It’s kind of fun, in the midst of all the seriousness of trying to piece life together, to have moments when you’re laughing together.”

Through good and bad times, Dave and Jana know that being house parents is another way for them to serve the Lord. “I try to be gentle with building a relationship with them – not hiding my faith in any way but not shoving it down. Instead, making myself available and really praying about it too,” Jana said. “I pray that when God opens certain moments that I do feel comfortable to be able to speak.”

Through their faith, patience and positivity, Dave and Jana are a key part of the success that is Jubilee Village. “The fruit of this place is not on the short side,” Jana said. “We had a young woman who had been here about ten years ago come back and do some volunteering. She said that the love and advice that she got at Jubilee Village bore fruit later on in her life.”

Through every success and every challenge, Dave and Jana remain committed to Jubilee Village because they truly believe that good work is being done. “Girls leave here changed. I can say that 100% of the time, no matter what,” Jana said.