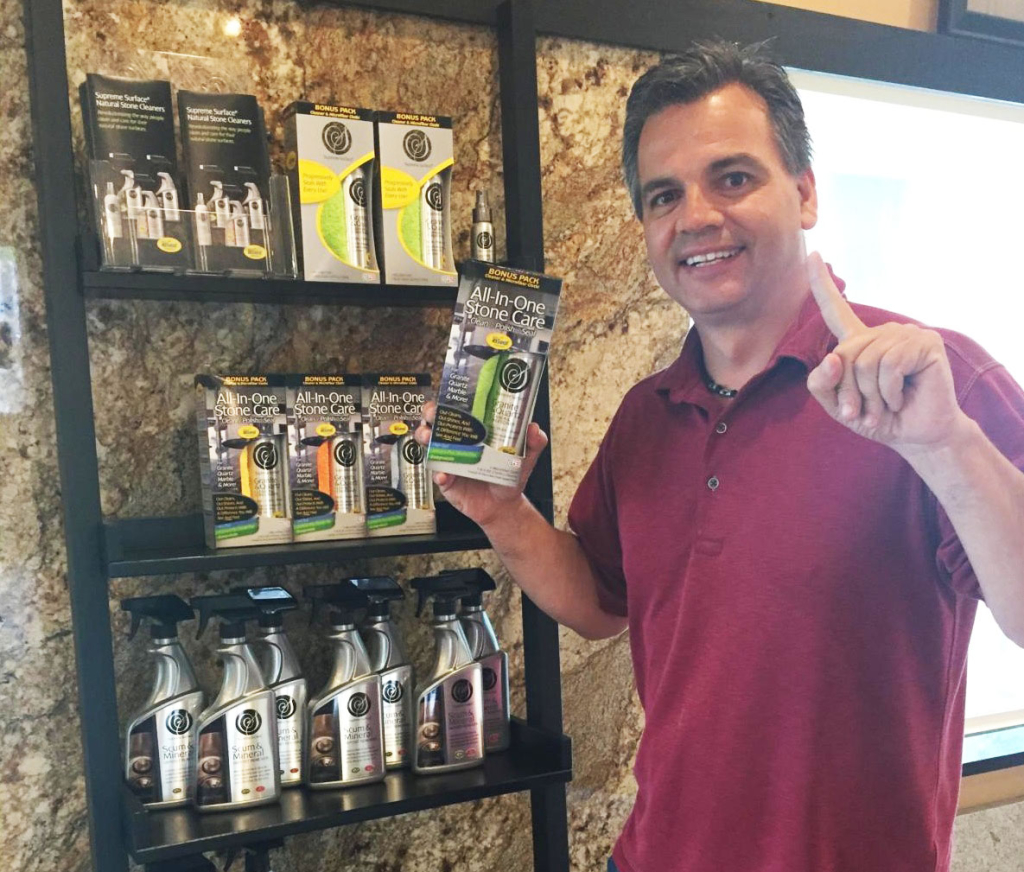 Tom Munro, today, with the line of specialty cleaners he created.

“I was one of those kids who needed something to do.”

Like most teenage boys, Tom Munro was full of energy and vigor. But his mother knew that could easily turn into trouble-making. She found Wheaton Youth Outreach (WYO) in the early 1980s, when Tom was 14 years old, and enrolled him in the summer youth employment program. At that time, WYO focused its efforts on outreach to young boys.

Finding a Mentor
Tom says the program did its job by keeping him busy. “We (a group of about 10 boys) would do yard work and housework in the community; we’d help people out by cleaning out basements, garages and sheds.”

Through the experience, a mentoring relationship emerged. “A guy named Randy Ellison led our group,” says Tom. “Randy was involved with the work projects and would teach us how to behave. He instilled a work ethic in us. He taught us to respect ourselves, others and other people’s property.

“You had to be responsible and show up on time,” Tom adds. “In those days I would ride my bike on the Prairie Path from Winfield to Wheaton. I couldn’t always get a ride.”

According to Tom, Randy was a big influence on his life in and out of the program. Randy was also a wrestling coach at Wheaton North High School, where Tom attended school and became involved with the wrestling program. A few other Wheaton gentlemen including Jim Huck and Paul Faris helped the boys raise money for wrestling trips. “Randy mentored us in a very unique way,” Tom remembers. “He created a team of people and a great environment for kids to be a part of. I remember Randy taking our group on a canoe trip somewhere in Wisconsin. It was one of the most positive and memorable experiences I’ve ever had.” 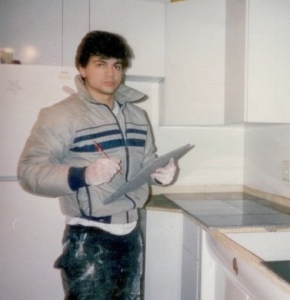 Tom Munro working on his first granite countertop in 1989.

A Career Path
Thanks to Randy and WYO, Tom grew into a responsible young man who understood the value of hard work. After a couple summers in the WYO program, he started working at the A&W drive-through in Wheaton.

Later in high school, Tom started working as a tile setter’s helper for his Uncle Don and frequently worked for a tile company in Glen Ellyn. It was there that he found another mentor. “Scott Watson taught me how to read blueprints and do takeoffs (estimates). He took me under his wing and let me  listen in as he worked with customers in the showroom on weekends, ” says Tom. “A few years later Scott helped me get my first sales job with one of his tile and stone distributors. Although I lived near Wheaton, my territory was Gary, Indiana, and the south side of Chicago. It was a great experience.”

Tom quickly worked his way up and became regional manager for the largest tile manufacturer in North America at the age of 21. In 1996 Tom pulled himself off the road and started his own tile and stone company. “I moved into fabricating granite countertops in 1999 and became one of the largest natural stone fabricators in the state of Indiana,” Tom says. In 2012, he expanded his business by developing the Supreme Surface brand of stone care products. His flagship product is a non-toxic “All-In-One” cleaner, polish, sealer, treatment for granite, quartz and marble. Today Tom has multiple brands of specialty cleaners, marketed under the name Munro-Co, that are sold through nearly 7,500 marble and granite fabricators across the United States and Canada as well as Bed Bath & Beyond, True Value and Ace Hardware stores.

Today, Tom is pulling out of the stone fabrication business and focusing his efforts on his brands of  specialty cleaners and treatments. He currently travels back and forth between his offices in Indianapolis and Wheaton.

Full Circle
It turns out Tom learned a thing or two about mentoring from his days at Wheaton Youth Outreach and his early career—he’s had the joy of mentoring his own son in his trade. “My 24-year-old son Eliot became interested in the cleaners business and spent a few years working with me,” he says. “Today he’s marketing a brand of hair care products specifically developed for curly hair. My youngest son Sam attends Indiana University and plans to pursue medical school. I’m very proud of both of them.”

When Tom looks back at his life and career, he credits Wheaton Youth Outreach with making a huge difference. “Having people who cared and taught me how to work and respect others was so important during my youth,” he says. “I can’t thank Outreach enough for what it taught me when I was younger. It helped me tremendously.”